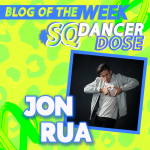 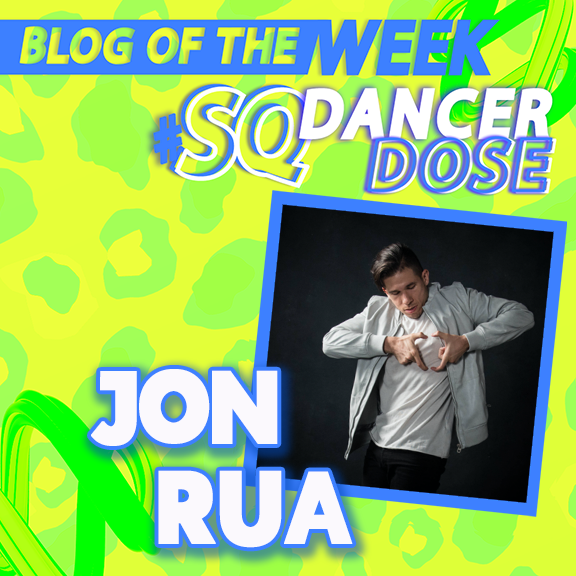 “ARE YA READY KIDS?!?!” Our #DancerDose of the week, Jon Rua, CAN’T HEAR YOU from all the way in Bikini Bottom. This Broadway dancer has a career that would knock the square pants off of Spongebob any day!

Who is Jon Rua?

An Actor. Singer. Dancer. Choreographer. He sure does it all, including an impressive streak of four Broadway shows. He first stepped foot on the Broadway stage in 2008 with In The Heights as a swing and replacement for Graffitti Pete, Sonny, and Usnavi. But like any artist, his theatrical journey started years before his Broadway mark. Rua was born and raised in New Jersey by a low-income family of Colombian immigrants who taught him that “success never comes easily.” He should do whatever it takes to achieve his goals, and it is important to move forward when something doesn’t go the way you imagined.

Funny enough, his first interaction with “dance” was through marching band in high school where he would go to social gatherings and dance for fun. He went on to Rutgers University earning a B.A. in Communication and Public Relations, but during this time in college was where he took his first “actual” dance class.

So how did he get from dancing on a college campus to Broadway? After taking his first dance class, he soon found his love for Hip-Hop and started looking for dance scenes in New York. He joined an unpaid Hip-Hop company a little after graduating (and a backpacking trip through Europe!), partly as a hobby and to learn more about his passion. Things started snowballing from there.

Rua began teaching class to children, booking smaller gigs. When he auditioned for RENT, the casting director called him in for In The Heights instead. Lo-and-behold, he made his Broadway debut in 2008. Since ITH, Rua has appeared in three Broadway shows as an Original cast member. In 2013, he opened Hands on a Hard Bodyoriginating the role of Jesus Peña where he captured audience’s hearts with the song “Born in Laredo.” He then went on to be in Hamilton, originating the role of Charles Lee, as well as later becoming the Alexander Hamilton standby. Most recently (as foreshadowed earlier) he originated the roles of Patchy the Pirate and Krabby Patty in SpongeBob SquarePants: The Broadway Musical. While being a core part of the ensemble, as well as featured roles in both shows, he also took part in the choreographic process.

Choreographic Career and The Grit

Rua’s choreographic credits are equally impressive. Rua first started choreographing on the PHISH 2013 fall tour. He then went on to choreograph at  The Muny, for their production of Aida and Jesus Christ Superstar. After that, Rua then served as Assistant Choreographer for various Broadway shows. He started a dance group called The Grit. This group established “a groundbreaking new genre of storytelling movement blending contemporary and classical aesthetics of performing arts incorporating the styles of Hip-Hop, Funk, Contemporary, Jazz, and Musical Theatre.”

You can see more of our Rua’s work here including his most recent featured work “LoveFound: a Mind’s journey through Love” where he served as the director, choreographer, and executive producer.